H-vision enjoys a prominent position in Rotterdam’s ‘Municipal Perspective on Hydrogen’, which the local administration presented on July 21. The Municipality of Rotterdam has decided that over the next few decades, hydrogen will mainly be used to make the local industrial cluster greener – and as a feedstock for chemical processes.

The Municipality views blue hydrogen as an essential step in the sustainable transformation of Rotterdam’s port and industrial cluster. It also recognises that this hydrogen type can stimulate the development of a healthy market for hydrogen in general. This specifically relates to the hydrogen supplied by the H-vision network, which will predominantly be used as a fuel for generating heat at high temperatures for the process industry. To the extent that this heat cannot be supplied using e.g. electric power, the Municipality sees blue hydrogen as an efficient solution to reduce the carbon emissions of Rotterdam’s industrial sector.

The Municipality has drawn up a decision-making framework for its outlook document, which also includes the utilisation of hydrogen. The listed applications are used as a feedstock, as a fuel for industrial heat, as a fuel for heavy transport and in the context of storage and grid stability. This prioritisation has led the Municipality to include the H-vision project in its survey of hydrogen projects that can help realise its vision.

Rotterdam is particularly interested in H-vision for the capacity of its hydrogen to generate high-temperature industrial heat and to contribute to the city’s ambition to become fully climate-neutral by 2050. 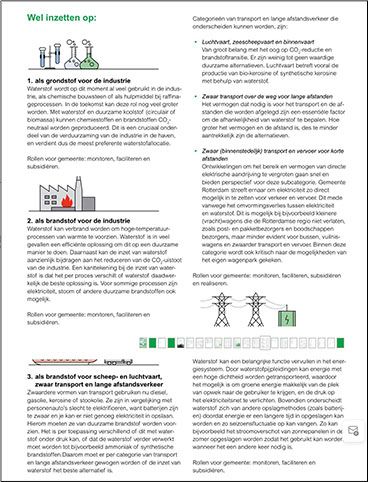